Welcome to the website of Right to Recall Party, the only political group in India, where donations are prohibited.

About my Right to Recall movement : I started the “Right to Recall” movement  in oct-1998. Now I have renamed the movement as “Movement for Appearance based Positive Right to Recall Drafts” . (The renaming had to be done  to counter psuedo-recallists like The Anna and their fake right to recall movement. I will explain this in detail later). I had published drafts for right to recall PM, right to recall Supreme Court Chief judge, rtr RBI Governor etc  in oct-1998. I revised the drafts in 2004 and added sms/atm features in the drafts in jan-2008. The drafts became more well known amongst non-80G-activists after I contested loksabha-2009 election to spread more information about RTR. Today, there are some 200-300 volunteers all over India spending about 4-5 hours a week in spreading information about RTR-drafts. The main difference or “innovation” in my proposed rtr procedures as against rtr procedures used in USA is that my proposed rtr procedures  use “in-person appearance” and not signatures.  So the rtr procedures I have proposed are cheaper and prone to fraud. eg rtr PM and rtr Supreme judge will cost zero rupees to Government and will cost mere Rs 3 per citizen (or barely Rs 250 crore to all citizens) who want change. And this cost will come down to few below Rs 5 crore atm\sms based procedures are kept in place. And rtr does not increase instability as once rtr comes, PM, CM, judges, MPs, MLAs etc behave well and so need to recall doesn’t come often (eg in US only 2 out of 500-700 Governors faced recall). Despite such low costs and zero possibility of instability, we have irresponsible people like L K Advani, Subramanian Swamy, Subhash Kashyap, CEC Kureshi, ex-CEC Lingdoh spreading lies that rtr is too expensive and will bring instability. The reality is that LKA or Swamy or Election Commission has never ever conducted a study on rtr and are merely throwing lies. And biggest damage is coming from psuedo-recallists such as The Anna and The Team who deliberately insist on draftless debates on rtr and insist on very cumbersome/expensive and fraud prone signature based procedures to enable anti-recallists to defame rtr.

I need your time (only time, I am against donations) to spread correct information on RTR, tackle those who are spreading lies against RTR (such as LKA, Subramanian Swamy, exe-CEC Lingdoh , CEC Kureshi, Subhash Kashyap) and also expose psuedo-recallists such as The Anna and The Team.

So what is this Right to Recall in short?

So what is this "Right to Recall" in short? It means exact procedure by which citizens replace PM, Supreme Court judges, CM, MPs, MLAs, Reserve Bank Governor or any official from PM to Collector to Sarpanch if the need be. What is the importance of RTR?

Well, let me ask you one question first. The question is very important. Say you own a factory with 100 employees such as managers, laborers etc. And suddenly Govt makes 2 new rules –

1.      you can NOT expel managers till they are 65 years and cant expel any workers for next 5 years

2.      every month, money from your account will be deducted and salary will go to your employees.

IOW, if we the commons of India, can not expel judges, MPs, Ministers, IAS etc they will all become indisciplined, corrupt, nepotic etc. This is what Shri Sanyal, Guru of Bhagat Singh said in 1925. RTR was implemented in Greece in 600 BC and made Greece so powerful that Greece could win up to the river Yamuna. And has been implemented in US since 1800s and is main reason why US has been able to conquer Iraq, Saudi Arabia, Kuwait, Pakistan, Libya and India may be next. But one doesn’t need examples of Greece and US to get the idea behind of right to recall --- it is plain vanilla common sense. Most problems of us commons in India are not different from the factory owner who can not fire workers for 5-35 years. And the solutions to our problems is also trivial --- procedures by which we may expel officers, Ministers, judges.

Important documents  in Hindi on RTR

Important documents  in Gujarati on RTR

Important documents  in English on RTR

If you are PC user, best way to study RTR is to download 301.pdf from http://rahulmehta.com/301.htm  . If you are accessing net from web, then pls see my facebook notes at http://facebook.com/mehtarahulc and following links.

3.      My contesting Ahmedabad Municipal Elections to spread information about Right to Recall Mayor and other Right to Recall law-drafts. And also, about RRG. -- http://rahulmehta.com/about_mrcm_party.htm

32.  List and Drafts of the all the laws we propose -- http://rahulmehta.com/all_drafts.htm

38.  What type of persons should join MRCM Party? -- http://rahulmehta.com/who_should_join.htm

53.  Proposed laws for direct election and recall of Mayor, CM and PM -- http://rahulmehta.com/a_proc_list.prez.htm

The most important reference is http://rahulmehta.com/301.htm . It has following chapters

chap-02.  Why is corruption in US police\courts less than India’s police?

chap-10.  A brief introduction to my “Prajaa-aadheen  Raajaa aka Right to Recall” Group

chap-11.  Differences between RRG and other parties, eminent intellectuals

chap-13.  Virus works in team of one : With 4 hrs a week, YOU can help Right to Recall cause

chap-14.  Getting  RTR  drafts  printed  in  Gazette  via  Aandolan, not  via  Election  Winning

chap-18.  The Plan : Informing activists about RTR and saving movement from pseudo-recallists

chap-19.  Why against donations?

chap-29.  Weaponization of us commons

chap-32.  RRG proposals to save Hindus in Bangladesh

chap-51.  There may be some drops of blood, if not rivers

chap-54.  A possible fate of India if MRCM, RTR etc Laws do not come

chap-58.  List - 1 : Enumerated Powers we commons will get  from RRG proposals

chap-60.  List - 3 : Differences between proposals of RRG and intellectuals

Issue, Department, Draft etc  in alphabetical order, with chapters and sections in which they are listed in http://rahulmehta.com/301.htm 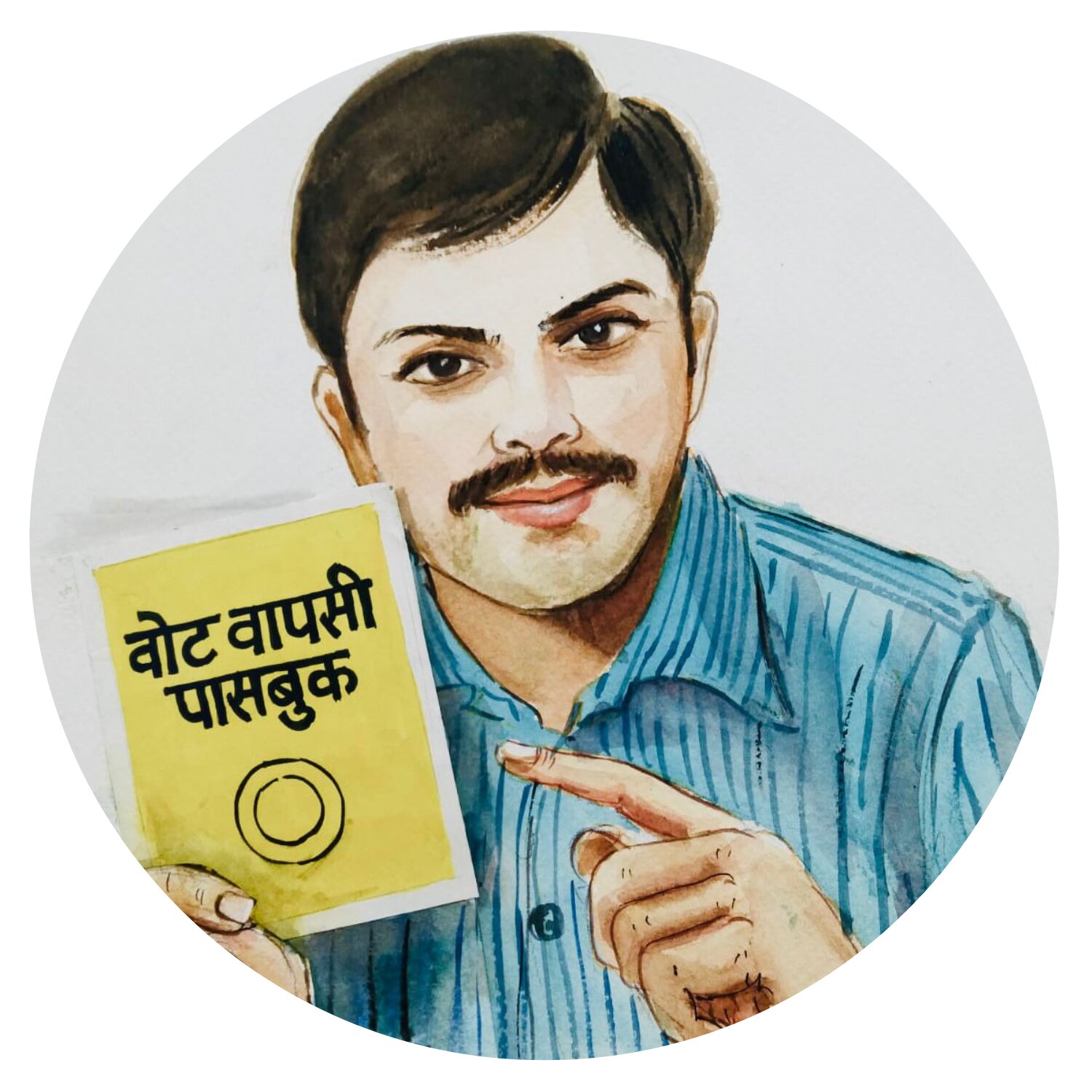 I, Rahul Chimanbhai Mehta, did my B Tech from Indian Institute of Technology,  Delhi in Computer Science in 1990 and then did MS from New Jersey State University. I worked in USA till Mar-1999 and have been in India thereafter working as a software developer.

I started campaigning for right to recall PM, MP, Lokpal, Supreme Court judges in oct-1998. In oct-1998, I published the first set of proposed RTR law-drafts. And in 2004, I published the second set of RTR PM, MP etc drafts. The main difference or “innovation” in my proposed procedures as against RTR procedures actually used in USA is that my procedures  use “in-person appearance” and not signatures.  This brings down the cost by over 95%. The cost of RTR procedures I have proposed is less than Rs 3 per citizen per recall in first implementation and then reduces to few paise per citizen. As an example, the cost of  right to recall District Education Officer and MP procedures I have proposed is below Rs 45 lakhs per district and reduces to mere Rs 100,000 in the next round. As second example, the cost of right to recall PM or  Lokpal or Supreme Court judge procedures that I have proposed, which may involve 72 crore voters of India, below Rs 220 cr in first round and decreases to mere Rs 1 crore. When RTR comes, the Ministers, officers, judges etc start behaving properly and so need to recall sparingly comes. Eg less than two out of 600 Governors in US had to be recalled. So cost is non-issue anyway. The wrongful domination of India, which will increase when Lokpal system comes, can wreck weapon manufacturing, Maths Science education and growth of technology. RTR is necessary and sufficient reduce wrongful MNC domination in India and thus save India. Not  only that, RTR can also reduce poverty, corruption, inefficiency and improve education and Military. Further, only RTR and Jury System can also reduce nepotism prevalent in judiciary.

To inform citizens that “appearance based RTR draft” is cheap, immune to instability, can bring down corruption/inefficiency and also bring down wrongful MNC domination, I have been distributing pamphlets and posting on websites such as bharat-rakshak.com, orkut, facebook etc. Since dec-2008, I have been giving newspaper advertisements and have given about 15 advertisements in Gujarat Samachar, Divya Bhaskar, Ahmedabad Mirror and Indian Express. To further spread the information, I have been contesting elections. I was a candidate in Gandhinagar Loksabha election in May-2009. election. I got 7300 votes, and was 4th rank (Ms Mallikaben got 3rd rank with 9300 votes), and later I contested Ahmedabad Municipality elections in oct-2010 and later contested Assembly by-election in Khadia, Ahmedabad in feb-2011.